Two aspects of the Mother as witnessed by Bansidhar

Handling wrong movements in the Mind 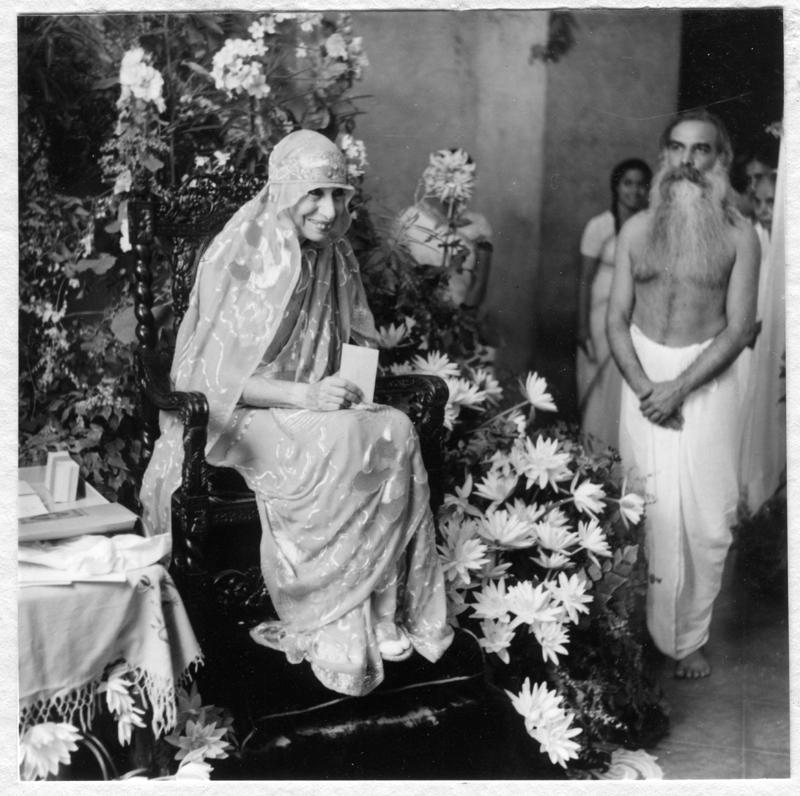 During Mother’s lifetime, work and those who did the work kept changing. Bansidhar, my brother (who first came here in November 1927) was fortunate to get the work of sweeping and cleaning Mother’s room in Meditation House, or rather she made him fortunate. When I remembered that he had once witnessed two aspects of the Mother, that of Mahakali and that of the compassionate, merciful Mahalakshmi, I asked him to write down his experience. Here it is in his words:

When I (Bansidhar) was cleaning Mother’s room in Meditation House, I would first sweep and then do the wiping work. Once I saw some things kept on a trunk. Beside it lay a piece of cellophane paper which Mother must have removed from a biscuit wrapper.

“She has many better papers,” I thought, “there is no need to leave this torn piece here; she must have been in a hurry and left it here.”

So I threw it in the wastepaper basket.

In the mornings around eight, Mother used to meet people in the Darshan room which was also Mother’s interview room.

During that time I was co clean her room. Hardly ten-fifteen minutes must have passed after I had thrown away the paper, when Mother came from the interview room and asked me: “There was a piece of paper here, where is it?”

B: “I threw it into the wastepaper basket.”

Mother: “If it was to be thrown away, I know how to throw it.”

She used more or less these words, but when she spoke her tone and face were like Mahakali’s. I froze in terror. Immediately I decided that henceforth whatever it be, I must never throw away anything. I had received my lesson.

Who would not be? I was extremely happy and decided to clean it perfectly. There are always many things in a bathroom. I picked up a cardboard box containing a bottle of perfume to wipe it. But while the box stayed in my grip, the bottle fell to the ground and broke, the perfume spilt all over and its scent filled the bathroom.

The scene brought the Mother to the bathroom from the interview room. I thought my end was imminent; I did not utter a word.

She looked at me for some time, then said: “Do not be afraid. It does not matter. Such things happen.”

I think these were her words. But what did I expect to hear and what was I hearing! Where was that Mahakali, who had appeared when I threw away just a piece of torn paper, and why this Mahalakshmi, when I broke an expensive bottle of perfume! My head bows down in gratitude.

Not only this. The next day, Mother sent a message through Champakbhai: “Tell Bansidhar not to worry, and not to go and buy another bottle from the market.”

When I threw away that piece of paper I was a new entrant in the Ashram. So it was only to teach me the important lesson not to throw away anything without reason that I was shown the Mahakali aspect. Since then I think well before throwing away anything and at the same time recall with happiness that vision of Mahakali.

Helplessness and the Will

Standing up against opposing forces

Influence of inertia on the Will Power