The whole root of difference between Indian and European culture springs from the spiritual aim of Indian civilisation. It is the turn which this aim imposes on all the rich and luxuriant variety of its forms and rhythms that gives to it its unique character. For even what it has in common with other cultures gets from that turn a stamp of striking originality and solitary greatness. A spiritual aspiration was the governing force of this culture, its core of thought, its ruling passion. Not only did it make spirituality the highest aim of life, but it even tried, as far as that could be done in the past conditions of the human race, to turn the whole of life towards spirituality. But since religion is in the human mind the first native, if imperfect form of the spiritual impulse, the predominance of the spiritual idea, its endeavour to take hold of life, necessitated a casting of thought and action into the religious mould and a persistent filling of every circumstance of life with the religious sense; it demanded a pervadingly religio-philosophic culture. The highest spirituality indeed moves in a free and wide air far above that lower stage of seeking which is governed by religious form and dogma; it does not easily bear their limitations and, even when it admits, it transcends them; it lives in an experience which to the formal religious mind is unintelligible. But man does not arrive immediately at that highest inner elevation and, if it were demanded from him at once, he would never arrive there. At first he needs lower supports and stages of ascent; he asks for some scaffolding of dogma, worship, image, sign, form, symbol, some indulgence and permission of mixed half-natural motive on which he can stand while he builds up in him the temple of the spirit. Only when the temple is completed, can the supports be removed, the scaffolding disappear. The religious culture which now goes by the name of Hinduism not only fulfilled this purpose, but, unlike certain credal religions, it knew its purpose. It gave itself no name, because it set itself no sectarian limits; it claimed no universal adhesion, asserted no sole infallible dogma, set up no single narrow path or gate of salvation; it was less a creed or cult than a continuously enlarging tradition of the Godward endeavour of the human spirit. An immense many-sided many-staged provision for a spiritual self-building and self-finding, it had some right to speak of itself by the only name it knew, the eternal religion, sanātana dharma. It is only if we have a just and right appreciation of this sense and spirit of Indian religion that we can come to an understanding of the true sense and spirit of Indian culture. 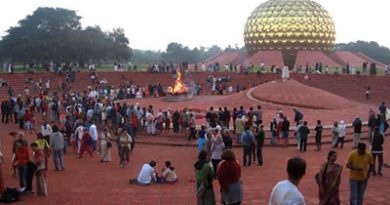