Sweet Mother, with the human mind is it possible to recognise another person’s soul?

Things are not so clear-cut and separate as they are in speaking; that is just why it is quite difficult to see very distinctly and clearly in oneself the different parts of the being, unless one has had a very long training and a long discipline of study and observation. There are no watertight compartments between the soul and the mind, the vital and even the physical. There is an infiltration of the soul into the mind. In some people it is even quite considerable, it is perceptible. So, the part of the mind which has a kind of sensibility, of subtle contact with the psychic being, is capable of feeling the presence of the soul in others.

Those who have the ability to enter to a certain extent into the consciousness of others to the point of being able to see or feel directly their thought, their mental activity, who can enter the mental atmosphere of others without needing to use words to make themselves understood, can easily differentiate between someone whose soul is active and someone whose soul is asleep. The activity of the soul gives a special colouring to the mental activity—it is lighter, more comprehensive and luminous—so that can be felt. For instance, by looking into someone’s eyes you can say with some certainty that this person has a living soul or that you don’t see his soul in his eyes. Many people can feel—“many”, I mean among evolved people—can say that. But naturally, to know exactly how far somebody’s soul is awake and active, how far it rules the being, is the master, one must have the psychic consciousness oneself, for that alone can judge definitively. But it is not altogether impossible to have that sort of inner vibration which makes you say, “Oh! This person has a soul.”

Now, obviously, most often what people—unless they are initiated—call “soul” is the vital activity. If someone has a strong, active, obstinate vital which rules the body’s activities, which has a very living or intense contact with people and things and events, if he has a marked taste for art, for all expressions of beauty, we are generally tempted to say and believe, “Oh! he has a living soul”; but it is not his soul, it is his vital being which is alive and dominates the activities of the body. That is the first difference between someone who is beginning to be developed and those who are still in the inertia and tamas of the purely material life. This gives, first to the appearance and also to the activity, a kind of vibration, of intensity of vibration, which often creates the impression that this person has a living soul; but it is not that, it is his vital which is developed, which has a special capacity, is stronger than the physical inertia and gives an intensity of vibration and life and action that those whose vital being is not developed do not possess. This confusion between the vital activity and the soul is a very frequent one…. The vital vibration is much more easily perceptible to the human consciousness than the vibration of the soul.

To perceive the soul in someone, as a rule the mind must be very quiet—very quiet, for when it is active, its vibrations are seen, not the vibration of the soul.

And then, when you look at someone who is conscious of his soul, and lives in his soul, if you look like this, the impression you have is of descending, of entering deep, deep, deep into the person, far, far, far, far within; while usually when you look into someone’s eyes, you very soon come to a surface which vibrates and answers your look, but you don’t have that feeling of going down, down, down, down, going deep as into a hole and very far, very, very, very far within, so you have… a small, very quiet response. Otherwise, usually you enter—there are eyes you cannot enter, they are closed like a door; but still there are eyes which are open —you enter and then, quite close behind, you come to something vibrating there, like this, shining at times, vibrating. And then, that’s it; if you make a mistake, you say, “Oh! He has a living soul”—it is not that, it is his vital.

In order to find the soul you must go in this way (gesture of going deep within), like this, draw back from the surface, withdraw deep within and enter, enter, enter, go down, down, down into a very deep hole, silent, immobile, and there, there’s a kind of… something warm, quiet, rich in substance and very still, and very full, like a sweetness—that is the soul.

And if one is insistent and is conscious oneself, then there comes a kind of plenitude which gives the feeling of something complete that contains unfathomable depths in which, should one enter, one feels that many secrets would be revealed… like the reflection in very peaceful waters of something that is eternal. And one no longer feels limited by time.

One has the feeling of having always been and of being for eternity.

That is when one has touched the core of the soul.

And if the contact has been conscious and complete enough, it liberates you from the bondage of outer form; you no longer feel that you live only because you have a body. That is usually the ordinary sensation of the being, to be so tied to this outer form that when one thinks of “myself” one thinks of the body. That is the usual thing. The personal reality is the body’s reality. It is only when one has made an effort for inner development and tried to find something that is a little more stable in one’s being, that one can begin to feel that this “something” which is permanently conscious throughout all ages and all change, this something must be “myself-. But that already requires a study that is rather deep. Otherwise if you think “I am going to do this”, “I need that”, it is always your body, a small kind of will which is a mixture of sensations, of more or less confused sentimental reactions, and still more confused thoughts which form a mixture and are animated by an impulse, an attraction, a desire, some sort of a will; and all that momentarily becomes “myself”—but not directly, for one does not conceive this “myself’ as independent of the head, the trunk, the arms and legs and all that moves—it is very closely linked.

It is only after having thought much, seen much, studied much, observed much that you begin to realise that the one is more or less independent of the other and that the will behind can make it either act or not act, and you begin not to be completely identified with the movement, the action, the realisation—that something is floating. But you have to observe much to see that.

And then you must observe much more still to see that this, the second thing that is there, this kind of active conscious will, is set in motion by “something else” which watches, judges, decides and tries to found its decisions on knowledge—that happens even much later. And so, when you begin to see this “something else”, you begin to see that it has the power to set in motion the second thing, which is an active will; and not only that, but that it has a very direct and very important action on the reactions, the feelings, the sensations, and that finally it can have control over all the movements of the being—this part which watches, observes, judges and decides.

That is the beginning of control.

When one becomes conscious of that, one has seized the thread, and when one speaks of control, one can know, “Ah! yes, this is what has the power of control.”

This is how one learns to look at oneself. 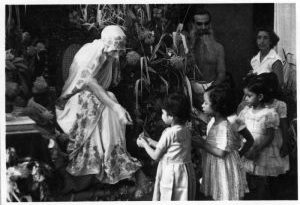 Being conscious to change

The Power of Sri Aurobindo’s name