What happened to me during that period I am not impelled to say, but only this that day after day, He showed me His wonders and made me realise the utter truth of the Hindu religion. I had had many doubts before. I was brought up in England amongst foreign ideas and an atmosphere entirely foreign. About many things in Hinduism I had once been inclined to believe that it was all imagination; that there was much of dream in it, much that was delusion and maya. But now day after day I realised in the mind, I realised in the heart, I realised in the body the truths of the Hindu religion. They became living experiences to me, and things were opened to me which no material science could explain. When I first approached Him, it was not entirely in the spirit of the Bhakta, it was not entirely in the spirit of the Jnani. I came to Him long ago in Baroda some years before the Swadeshi began and I was drawn into the public field.

When I approached God at that time, I hardly had a living faith in Him. The agnostic was in me, the atheist was in me, the sceptic was in me and I was not absolutely sure that there was a God at all. I did not feel His presence. Yet something drew me to the truth of the Vedas, the truth of the Gita, the truth of the Hindu religion. I felt there must be a mighty truth somewhere in this Yoga, a mighty truth in this religion based on the Vedanta. So when I turned to the Yoga and resolved to practise it and find out if my idea was right, I did it in this spirit and with this prayer to Him, “If Thou art, then Thou knowest my heart. Thou knowest that I do not ask for Mukti, I do not ask for anything which others ask for. I ask only for strength to uplift this nation, I ask only to be allowed to live and work for this people whom I love and to whom I pray that I may devote my life.” I strove long for the realisation of Yoga and at last to some extent I had it, but in what I most desired, I was not satisfied.

The Mother is always with you 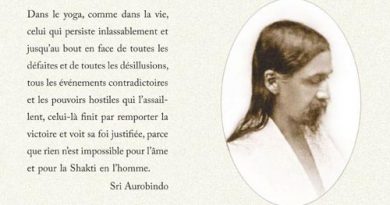