A beautiful gift by Sri Aurobindo on His 90th birth anniversary … we had a meditation here on the 15th, at ten o’clock. At quarter to ten, I was sitting here at the table in a total silence.

And then … I can’t say Sri Aurobindo came, for he is always here, but he manifested in a special way…. Concretely, in the subtle physical, he became so tall that, sitting cross-legged as they do here, he covered the whole compound — even extended a bit beyond it! He was literally sitting upon the compound; so to the extent that the people meditating were not closed, they were all inside him. He was sitting like that, and I could feel the friction of his presence in the subtle physical — an utterly physical friction! And I saw him, I saw him sitting there, very tall and perfectly proportioned; and then he started gently, gently descending — this descent is what caused the friction — gently, very gently, so as not to give people a shock.

Then he settled there and stayed for a little more than half an hour, a few minutes more, like that, absolutely still, but fully concentrated on all the people — they were inside him. I was sitting here smiling, almost … almost laughing, really; you could feel him like that everywhere, everywhere. And with such peace! Such peace, such force, such power…. And a sense of eternity, immensity, and absoluteness. A sense of absoluteness, as if all were fulfilled, so to speak, and one lived in Eternity. It was compelling. One had to be just plain dense not to feel it. … And afterwards, it’s not as though he suddenly went away: he went slowly, slowly, slowly, like something evaporating; then things went back to normal, with various concentrations here and there, various activities…. I think some people must have felt it — maybe they didn’t fully understand, since they lack total vision, but they may have felt as if he were descending into them. Because in the afternoon, when everything had returned to normal (he is always here of course, but not that way! He is always here), there was a kind of wave of regret passing through the atmosphere, like something saying, “Oh, this beautiful thing has come to an end! Oh, now August 15 is over, this beautiful thing is over.”

But it was like I described, something so … more than concrete, I don’t know how to express it, it was … there was a sense of absoluteness about it. I have often seen him in his supramental light; he has come very often (he used to come when I went to the balcony; sometimes he was above the Samadhi; he came very often). But that … first of all, the proportions were enormous – sitting down, I tell you, he extended beyond the compound; and he materialized in a way that could be physically felt. And there was such confidence, such joy, such certainty; everything was so sure, so altogether certain, as though all had been accomplished. It was the most beautiful August 15 we ever had. (silence) All his sweetness and all his splendor and all his power and all his calm were there — and far stronger and clearer than when he was in his body! I always had that same impression — it was always like that in his room; and I would always have that impression whenever I met him. And even when I was working, all the while I would feel him behind me, doing everything. But this was much stronger. Much stronger. It was … one was caught up and there was no way to get out of it. That’s how it was – something absolute. 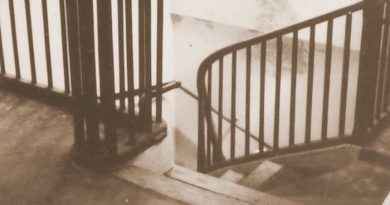