Freedom and fatality, liberty and determinism are truths that obtain on different levels of consciousness. It is ignorance that makes the mind put the two on the same level and pit one against the other. Consciousness is not a single uniform reality, it is complex; it is not something like a flat plain, it is multidimensional. On the highest height is the Supreme and in the lowest depth is matter; and there is an infinite gradation of levels of consciousness between this lowest depth and the highest height.

In the plane of matter and on the level of the ordinary consciousness you are bound hand and foot. A slave to the mechanism of Nature, you are tied to the chain of Karma, and there, in that chain, whatever happens is rigorously the consequence of what has been done before. There is an illusion of independent movement, but in fact you repeat what all others do, you echo Nature’s world-movements, you revolve helplessly on the crushing wheel of her cosmic machine.

But it need not be so. You can shift your place if you will; instead of being below, crushed in the machinery or moved like a puppet, you can rise and look from above and by changing your consciousness you can even get hold of some handle to move apparently inevitable circumstances and change fixed conditions. Once you draw yourself up out of the whirlpool and stand high above, you see you are free. Free from all compulsions, not only you are no longer a passive instrument, but you become an active agent. You are not only not bound by the consequences of your action, but you can even change the consequences. Once you see the play of forces, once you raise yourself to a plane of consciousness where lie the origins of forces and identify yourself with these dynamic sources, you belong no longer to what is moved but to that which moves. 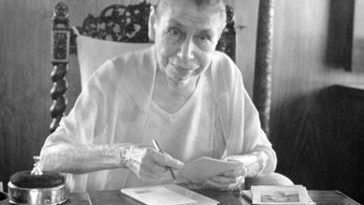 The awakening of the cells of the body – The flu epidemic

LIberty : when it is disastrous